Below Deck crew members in past seasons have certainly got bigger charter guest tips than the latest two $25K tips in season 9. However, it’s still BIG MONEY!

The total amount of the first $25,000 tip was announced by Captain Lee, but the split for crew members was left out. So how much did each crew member get from splitting the generous tip given from Ronnie and Jeremy’s families?

Later on in Below Deck season 9, fans were shocked to see primary charter guest Tony Thornton give a $25,000 tip, too! And there was one less crew member aboard My Seanna for part of the charter because Jessica Albert quit.

At the end of episode 6, the My Seanna crew parties hard after getting their biggest tip so far. Excited from all the money, Chef Rachel splashes wads of $100 bills in her cabin with Chief Stew Heather Chase. Bosun Jake Foulger got so “trollied” drunk he goes streaking at the restaurant. Oh, and he makes out a bunch with 2nd Stew Fraser Olender despite insisting not being bisexual or gay. That’s what an extra big tip will do to you.

How Much Each Cast Member Got From The First $25K Tip

After doing some basic math by using the previous tips as a reference guide, each crew member made $2,080 from the $25,000 tip from the nice group of charter guests.

The previous two tips given out on season 9 so far totaled $18,000 and $19,800 respectively, with each crew member getting a share of $1,500 and $1,650 on those two charters. Captain Lee has previously said he always divides the total tip equally among crew members. So you can simply divide the total tip by an individual’s cut of said tip to figure out the number of crew members splitting it.

The first tip of $18,000 ended up with crew members getting $1,500 each. When you divide the total tip by 1,500 it equals 12. Thus, there are 12 crew members splitting the tip, which is a bit odd because on-camera there are only 9 crew members. Captain Lee, First Officer Eddie Lucas, Jake, Rayna, Wes, Heather, Fraser, Jessica and Rachel. So who are the other crew members?

Well, according to Captain Lee, there are off-camera crew too!

Three hidden crew members were on My Seanna in season 9.

How Much Cast Members Made From the 2nd $25K Tip

Despite charter guest Tony’s friend being unimpressed with allergy screwups, the crew tied their top tip of the season. Chef Rachel had a tough time getting the food right with the shellfish and dairy allergies. Heather Chase got dragged by fans for talking back to a charter guest raising the allergy issue.

However, when the dust settled from the charter, Tony gave Captain Lee an envelope filled with $25,000. With one less employee onboard for part of the charter, each crew member received $2,270 from the one charter! However, Heather’s friend and new stew Kaylee Milligan joined the charter midway, so Captain Lee asked each crew member to follow his lead and give $100 from their tip to Kaylee. So, crew members took home $2,170 each. Except Rayna, who didn’t give Kaylee $100 from her tip. So Rayna received the full $2,270, and Kaylee made $1,000 if the other 10 crew members each gave her $100.

In previous seasons charter guest tips have definitely been bigger. Captain Lee believes the biggest tip ever received was $35,000 from primary charter guest Timothy Sykes’ group. However, a $25,000 tip is certainly well above average for a charter tip. It’s definitely better than getting no tip at all!

It also is a lot more than other tips given out in season 9 of Below Deck.

In the first charter of Below Deck season 9, primary charter guest Nikki Foster was unimpressed with interior not keeping up with her insatiable demand for towels. That, and Fraser forgetting a trash bag on the sofa. Those were potentially costly mistakes, as the tip was only $18,000.

The next charter was a gong show, but this time it was all the charter guests’ fault their drunken antics.

Primary charter guest Michael Durham and his friend Justin Richards were chewed out by the captain for their whiskey-induced buffoonery. Despite all the trouble they caused the crew, they did leave a decent tip of $19,800, or $1,650 per crew member. Still, that’s not that remarkable compared to other tips like Ronnie and Jeremy’s, and they were a lot more hassle.

There’s still one more charter left on this season of Below Deck, so the $25,000 tips could still be beaten. The crew are also getting into the groove of things and can really wow this charter into giving them a huge tip. The sky’s the limit!

The next episode of Below Deck season 9 airs on Bravo at 8 p.m. EST. 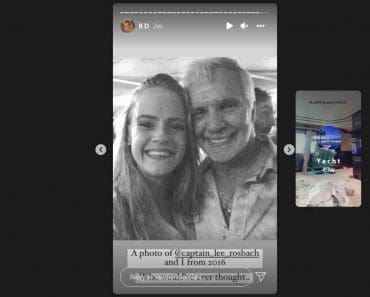