The Ultimatum cut down over six weeks of filming down to fewer than nine hours of content in nine episodes. The number of deleted scenes is far more than the content viewers did see. Furthermore, The Ultimatum show production recruited young adults to be on the show, making the show premise kind of fake.

On top of that, some cast members are claiming some of the narratives in the show were fabricated.

A lot of the date scenes were deleted from the final cut of The Ultimatum.

Madlyn Ballatori recently said she had a tantric yoga date with Colby Kissinger and went wakeboarding with Randall Griffin.

Lauren Pounds revealed in an Instagram story that on one of her drunken dates with a guy she told them she is obsessed with raccoons and would like one as a pet.

She also revealed that her boyfriend Nathan Ruggles didn’t get much airtime and his finer moments got cut from the show.

“There’s so many things I wish y’all got to see, especially the sweet moments between Nathan and I. He also opened up about his sister passing away with Shanique on one of their dates and even the production team was crying because it was so emotional and powerful,” Lauren wrote in an Instagram story.

Rae’s dad went paintballing with his daughter and Zay, which didn’t get any airtime. Yet another deleted scene from The Ultimatum.

April recently said in an interview that she wished the show included a guy hitting on her. In the middle of The Ultimatum season 1, Jake gets mad at April for giving out her number to a guy in the club. April claimed that the interaction would exonerate her of any wrongdoing.

Meanwhile, Jake Cunningham said a deleted scene included him accusing April of choosing Instagram over him. He also said April told him he could kiss and cuddle his partner in another deleted scene. However, once April found out he was vibing well with Rae she changed her mind.

Lots of scenes from the reunion episode were also cut out.

Lauren claims she talked a lot on the reunion. Apparently she shed light on how Nate and her resolved their issues, but it didn’t air.

Fake & Scripted Scenes From The Ultimatum

The show premise of one partner wanting to go on the show to give an ultimatum may be faked in some cases. Buzzfeed reported that show production recruited Madlyn, Cobly, Jake and April to be on the show. Furthermore, Nate and Lauren joined the show from recruitment. It appears cast members or show producers scripted some of the “ultimatums”.

Lauren also posted an Instagram story claiming the show production faked a lot of narrative around her and Nate’s time on the show.

“What you saw on TV was not an accurate depiction of Nathan and I’s relationship, it was picked, edited and maliciously twisted to provide an entertainment experience for viewers,” Lauren said about The Ultimatum in a statement defending herself and Nate.

Lauren eventually redacted part where she said show producer’s made a fake depiction of her and Nate. Needless to say, not everything you watch on reality TV is real.

Madlyn also shared a video of Randall imitating a show producer of The Ultimatum in which he makes it pretty clear they coach the cast members on how to act in front of the camera.

“Let’s talk more about your love. Not so much about with your ex, but about the one you have now. Maybe a kiss… Let’s get it done,” Randall says, imitating the show producer talking to them. 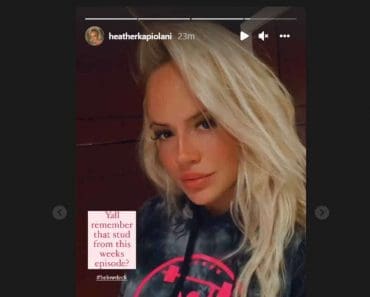