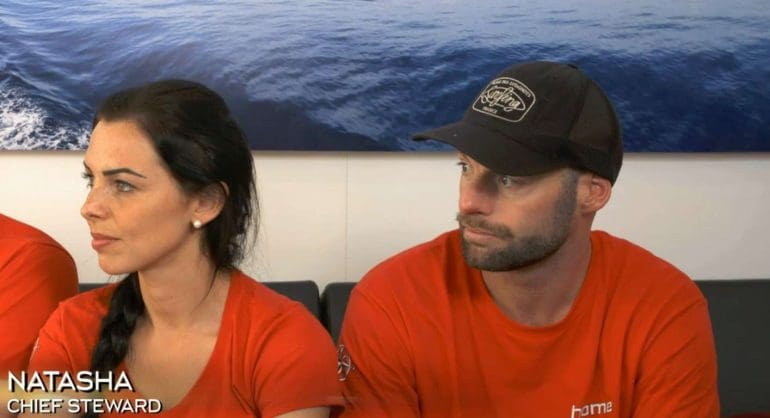 Below Deck Mediterranean season 7 fans are arguing over whether Chief Stew Natasha Webb or Chef Dave White was worse in their relationship breakup.

After the first four episodes, fans dragged Natasha for playing with Chef Dave’s emotions. Many Below Deck fans found Natasha toying with Dave, playing hot and cold with him, claiming she was “gaslighting” Chef Dave. They pointed out how she planned for them to share a cabin together. She flirted a lot with him with cheeky banter, smiling profusely and repeatedly touching him in front of other crew members.

However, once Chef Dave got drunk on their first night out and let it slip to other crew members they hooked up prior, things changed. Natasha wanted to keep their yachtie tryst quiet. She’d cheated on her ex boyfriend with Dave while they were working on another superyacht. After Natasha found out Dave spilled the beans, the rest of the night she flirted with Deckhand Jason Gaskell, making Dave get aggressively jealous back on superyacht Home‘s crew mess.

The next day Natasha was very cold to Dave, her feelings had clearly changed or become conflicted. However, after a long period of relative icy cold silence, Natasha invited Dave down to talk, only to invite him into the shower to reignite their tryst.

However, she still didn’t completely warmup to Dave again after that, largely ignoring him on their second charter. Throughout the charter Dave’s in despair, clearly in love with Natasha. Another time, when Natasha sleeps in a guest cabin because Dave’s “being weird”, he’s seen breaking down in tears.

Below Deck Med viewers of Below Deck Med season 7 cannot agree on if Dave’s or Natasha’s behavior on episode 5 was worse in their unraveling relationship.

“She led him on and chose to be honest with him when he was drunk af after ignoring him the whole afternoon. What were the hints? calling him babe and love? Shagging him in the shower? Acting like a child when someone said they looked good together? She never said anything to him about where their relationship was going, but was happy to use him for comfort and s*x. She’s also in the wrong! you can’t expect people to read your mind if you don’t communicate and you can’t blame editing for this because she looks just as bad with some of the things she says in commentary,” said Reddit user dietpepsiforlife on the Below Deck subreddit.

Another fan had a totally different viewpoint on their relationship’s breakdown and found his belligerent behavior and harassing text messages abusive.

“Dave is 100% in the wrong. If you are going to harass someone and not give space to someone who is clearly uncomfortable around you then she damn right has no obligation to be nice to you?? Why is production editing it to make it seem like a romance storyline when really it’s just obvious Dave can’t take the hints that she is no longer interested? Just because you like her does NOT mean she has to entertain it. Imagine being so uncomfortable in your living space that you cant even sleep in your own bed,” said Reddit user Federal-Figure-5786.

Another fan called for Dave’s firing for workplace harassment.

Fans Give Praise To Stew Kyle & Captain Sandy For Intervening

Meanwhile, other fans thought the real star in the deterioration of their relationship was Stew Kyle Viljoen. Kyle reporting the issue to Captain Sandy and talking calmly to a distressed Chef Dave really impressed fans. Many praised Kyle for his high emotional intelligence.

Captain Sandy supporting Chef Dave while he was undergoing stress and an anxiety attack in which he was crying also played favorably with most fans. Her redemption arc after firing former Chief Stew Hannah Ferrier continues.

Although a lot of fans picked sides, some thought both Natasha and Dave acted horribly in the ugly situation. Some fans are also blaming Below Deck production for casting Chef Dave on the show despite his previous mental health struggles.

Fans have also pointed out that Natasha previously said she doesn’t like being single and has always jumped into a relationship. In the preview for episode 6, fans see Natasha trying to get back with her ex boyfriend. Some fans claim Natasha needs constant validation and can’t be happy on her own.

I feel like Natasha has very self-destructive qualities. After cheating on her boyfriend with Dave (because her boyfriend cheated on her first) and creating this huge mess, she is now on the phone fighting to get back together with the original cheating boyfriend #belowdeckmed pic.twitter.com/RJyHYQTu0I

Natasha defend herself when she appeared on Watch What Happens Live with Andy Cohen on Monday, August 8.

“Dave and I were never in a relationship. We only knew each other a month before joining motor yacht Home and we hooked up a few times. It was a very messy situation,” Natasha said on WWHL. She also claimed they didn’t know they were going to star on Below Deck Med when they first started their tryst.

“I saw his true colors and who would want to be in that toxic relationship,” Natasha told Andy when asked if she ever planned to date Chef Dave.

She also said they didn’t hook up in the shower when she called him into the bathroom, she just wanted privacy to talk. Natasha also said there was no other choice than to pick Chef Dave to cabin with because no one else wanted to bunk with her (hmm…).

Natasha has shared on Instagram photos with a new boyfriend who is not her ex boyfriend while on the show. She also said on WWHL that she’s in the “most amazing” relationship.

Hopefully a resolution can be found and the two can carry on excelling at their respective jobs on superyacht Home in Malta.

What do you think? Did Natasha or Chef Dave act worse towards the other on the show? Leave a comment. 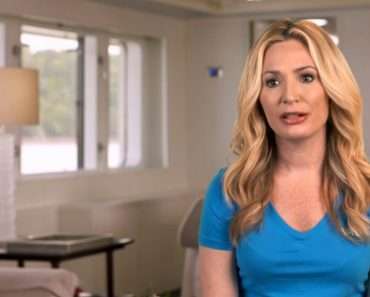 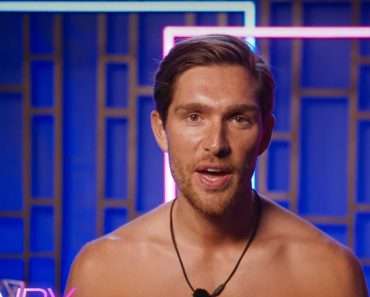